Dewey or Not Dewey: That is the Classification January 2016

When you use the UDM Library regularly and faithfully – and you really should; ; after all, you’re paying for it – the day will inevitably come when you will need to find a physical book in the physical shelf in the physical building. Sorry, but not everything is on the Internet just yet. They’re still making room for cat videos and those vacation photos you wish weren’t there. 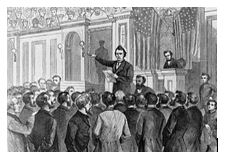 When that day does come, you will notice that the UDM Libraries do not use the Good Ol’ Dewey Decimal System you’re used to seeing. It may come as unpleasant shock so know that our system for classification – arranging materials by subject matter – was devised by Congress. 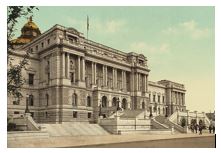 We’re not talking about the politicians on Capitol Hill, but the Good People at the Library of Congress (LC). These are not just skilled librarians, but also scholars with advanced degrees in their subject areas. The only filibusters they deal with are the ones in JK 1021.

Why not use the simple Dewey numbers instead of LC’s complicated mishmash of letters and numbers? Because university libraries do not serve the same purposes or collect the same sorts of materials as public libraries. They are generally much larger, and collect more specialized materials in support of their academic curriculums. The LC System is more flexible in arranging such information because it can be more easily expanded.

Take, for example, the subject of chess. The Public Library probably has a few general books on the subject, under the number:

This number will cover a wide range of chess materials, and indeed might be used for everything. An academic library, on the other hand, might have a larger collection with more specific subject matter; for instance,

This method of expandability ability to accommodate more specific subjects is also available in Dewey but only by adding agits to the base number. This can quickly become a nightmare for users, not to mention book shelvers and labelers. For example, a journal  about chess in Quebec would be simply GV 1314 in the LC system; with Dewey, it would be 794.1060714281. And that’s just the start. I’ve seen Dewey numbers with over 25 digits.

Finding books on the shelf using the LC System is actually easy; just go one line at a time, and you’ll get there with little trouble. Explaining the system is another matter, and perhaps best left for another blog post.