Chapters in the History of the Book–Hidden Treasures November 2016 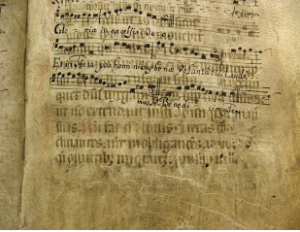 From the Greek “palímpsestos,” to scrape again.
This was the ultimate in recycling. Roman writers Catullus, Cicero, and Plutarch all told of the practice of making palimpsesti  on papyrus and wax tablets. (Avrin. p. 168)  After the fall of the Roman Empire the practice continued, manuscripts which were no longer useful or contained material considered pagan would have their pages cleaned so they could be reused. This would save time and money since parchment was expensive. Why is this important?  Ink containing iron  leaves a ‘ghost’ in the substrate which can be obvious, or might require special techniques such as spectral imaging to discern. So it is possible to see the original work, even under two or three layers.  Sometimes these are previously unknown texts, or works that we know existed but no copies have been found, such as the Archimedes Palimpsest. Sometimes they are works which are earlier versions of known works, which then can show how a particular text has evolved.

Avrin, Leila.  Scribes. Scripts, and Books: the book arts from antiquity to the Renaissance.  ALA, 1991

Noel, Will.  Restoring the Archimedes Palimpsest 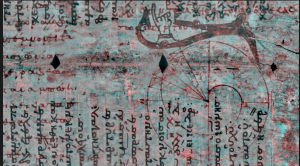 Detail of the Archimedes Palimpsest