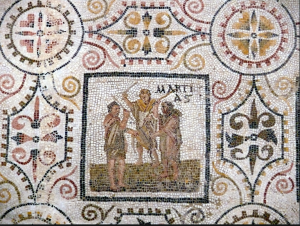 It’s the one of the most notorious dates in history; the day Julius Caesar was assassinated in 44 B.C.

It’s been immortalized by Shakespeare:

Caesar: (To the Soothsayer) “The Ides of March are come.
Soothsayer: “Ay Caesar, but not gone.
Julius Caesar: Act 3 Scene 1 http://shakespeare.mit.edu/julius_caesar/full.html
Almost everyone has heard the phrase “Beware the Ides of March” and they know it means certain doom, but where does all of this come from?  What are Ides anyway?

Ides refer to the days in the ancient Roman calendar that mark the middle of the month. Since it was a lunar calendar, this marked the full moon.  For most months this was the 13th, but the 15th for the longest months.  March would also have been the beginning of  the Roman  New Year.  In addition to the usual sacrifices, other celebrations were observed during this time–such as the feast of Anna Perenna: the goddess of the circle, or ring, of the year.

But what about the rest of it? How do we know about Julius Caesar’s assassination?

One source comes down to us from Plutarch.  In his Parallel Lives, beginning at chapter 63, all the signs point to a bad end:  http://penelope.uchicago.edu/Thayer/E/Roman/Texts/Plutarch/Lives/Caesar*.html

Another is Suetonius’ The Twelve Caesars, written about A.D. 121 http://penelope.uchicago.edu/Thayer/E/Roman/Texts/Suetonius/12Caesars/Julius*.html

For articles on the Ides of March see JStor: http://www.jstor.org/

It turns out other unfortunate things have happened on March 15th http://www.smithsonianmag.com/history/top-ten-reasons-to-beware-the-ides-of-march-8664107/