Chapters in the History of the Book–Book Curses. August 2016 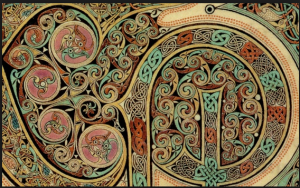 Detail from the Lindisfarne Gospels

This book belongs to none but me
For there’s my name inside to see.
To steal this book, if you should try,
It’s by the throat that you will hang high.
And ravens then will gather ‘bout
To find your eyes and pull them out.
And when you’re screaming “oh, oh, oh!”
Remember, you deserved this woe.
–Anonymous German scribe.

Before printing was invented, every clay tablet, scroll or book (manuscript) had to be written or copied out by hand. In order to protect such valuable and laboriously created materials, scribes would often include a few lines intended to prevent theft or damage, or even to curse those who might alter the text. These book curses often invoked the wrath of the gods, included inventive punishments or, by the Medieval period, excommunication or even anathema to discourage any would-be thief.

The oldest known book curse comes down to us from the ancient Assyrians:

The palace of Ashur-bani-pal, king of hosts, king of Assyria, who putteth his trust in the gods Asher and Belit…I have transcribed upon tablets the noble products of the work of the scribe which none of the kings who had gone before me had learned, together with the wisdom of Nabu insofar as it existeth [in writing]. I have arranged them in classes, I have revised them and I have placed them in my palace, that even I, the ruler who knoweth the light of Ashur, the king of the gods, may read them.  Whosoever shall carry off this tablet, or shall inscribe his name on it, side by side with mine own, may Ashur and Belit overthrow him in wrath and anger, and may they destroy his name and posterity in the land.

More Medieval examples:
Book of [the Abbey of] Saints Mary and Nicholas of Arnstein: If anyone take away this book, let him die the death; let him be fried in a pan; let the falling sickness and fever seize him; let him be broken on the wheel, and hanged. Amen.
From: British Museum, Ms. Harley 2798, folio 235 verso.

Whoever steals this Book of Prayer
May he be ripped apart by swine,
His heart be splintered, this I swear,
And his body dragged along the Rhine.

May he who steals you then be sent

A blow upon his fundament.

Twenty-first century librarians have to be content with applying a sticker in the back cover of every book, taken from the Michigan Compiled Laws: 750.364 Larceny from Libraries.