This week some of the library staff took some time out to pause and consider what we are thankful for:

Jennifer Dean, Dean of University Libraries and Instructional Technology: I am grateful to be here at Detroit Mercy and with everyone in Libraries/IDS.

Sara Armstrong, Associate Dean for Technical Services and Library Systems: I’m grateful for all the people I work with. Not only do we get awesome things done. You’re all fun to work with.

Marilyn Dow, Director of the Dental Library: I’m thankful to be able to assist students and contribute to their education and professional development.

Amy Keyzer, Assistant to the Dean: I’m grateful for the completion of our four new group study rooms! I’m happy to see students using them, even though the rooms still need a few finishing touches. I’m also thankful for the diversity of student organizations, and their presence in the library lobby. They enliven the space, enlighten the curious, and often entice the weak-willed with their baked goods and beverages for sale! 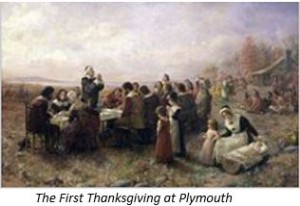 Sue Homant, Librarian:I am grateful for the four new group study rooms and for the new Dean of Libraries.

Julia Eisenstein, Librarian: I’m grateful for the opportunity to work with faculty and administrators who support the library and value the work of the librarians.

Pat Higo, Librarian: Having a new location for my desk where archive material is closer to work on.

Elizabeth Royal, Instructional Designer: I’m thankful for my really amazing co-workers up here at IDS and all of the people here at the library because they have been so welcoming! They’ve helped me learn a lot of new processes, given great feedback about the projects I’m working on, and helped me get adjusted to everything.

The Value and Fun of Graphic Novels November 2016

Do you know an non-reader, a struggling reader, or a reluctant reader? Do you have children, grandchildren, neighbors, nieces or nephews learning how to read? Turn them on to graphic novels.

Scholarly studies are showing that the combination of pictures and words aids comprehension and vocabulary for struggling readers. With their clever and entertaining illustrations, condensed text, and unique formats, graphic novels can effectively communicate complex ideas.

Other graphic novels teach traditional school subjects, such as The Manga Guide to Calculus and other manga guides to statistics, electricity, and physics.

And graphic novels can be read for purely entertainment purposes, such as Star Trek. Countdown, Star Wars, the Force Unleashed. II, or Big Nate Goes for Broke.

Tomorrow, August 25, the National Park Service turns 100! The park service is celebrating by offering free admission to all 412 national parks from August 25 through August 28.

100 years of protecting America’s natural, historical and cultural treasures from all over the United States. These more than 400 beautiful, historic and exquisite sites cover over 80 million acres consisting of approximately 18,000 miles of trails, more than 75,000 archaeological sites and at least 247 species of threatened or endangered plants and animals, and managing monuments, parkways, battlefields, cemeteries, and recreation areas.

The Park Service is celebrating with commemorative coins: a $5 gold coin featuring the heads of Theodore Roosevelt and John Muir who both worked to bring out the park system, a silver $1 featuring Yellowstone’s Old Faithful geyser, and the half dollar depicting experiences one has in the parks: a child finding a frog hiding in a fern and a hiker taking in a panoramic view of a mountain, and lake, and forest.

Or explore the Centennial Media Quality Photo Gallery representing the unique character of the parks.  Search for parks, programs, or topics.

Read about the visionary leaders of the park system: https://www.nps.gov/bestideapeople/index.html

Check out your invitation to the celebration! https://www.nps.gov/subjects/centennial/birthday-invitation.htm

Recently, Sue Homant, Head of Reference Services at the library, discussed her trip to Normandy, France with Cameron Pierson, library intern. Her experiences (and pictures) had them thinking about D-Day and the part librarians played in World War II. So, they dug a little deeper.

72 years ago, on 6 June 1944, the Allied Forces landed on Normandy in an event that would become known as D-Day. This was a major turning point in the war, contributing to the eventual defeat of the Axis Powers. Now, in 2016, most of us know of these events, either from our grandparents, school, or the History Channel. Yet, what is lesser known are the efforts undertaken by the American Library Association to insure that our men in uniform, no matter where they were in the world, would still have access to reading material. 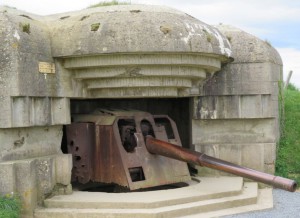 The Victory Book Campaign (V.B.C.) was a program that worked to maintain and enhance library services to those in the Army, Navy, and the Marines. Such services were spurred by the previous World War and laid the groundwork for continued library support, even to this day. Initiated by the leaders of the American Library Association, the campaign itself is said to have had mixed results as it worked within a war-time backdrop. Nonetheless, the program was able to collect in excess of a million books which were used by soldiers for continued education, technical support, and even leisure – something fundamental to morale.

The program coordinated with many organizations (both public and private) to obtain donations from the American people. The books collected and later deemed suitable were an effort to support the mental and emotional wellbeing of the soldiers during such a horrific war. This type of undertaking is astounding even by today’s standards. It serves to remind us of the democratic function of libraries. In appreciating this lesser known piece of history, one cannot think about libraries without also thinking about those democratic values so central to free societies.

Passet, J. E. (2007). [Review of the book Books and Libraries in American Society during World War II: Weapons in the War of Ideas, by Patti Clayton Becker]. New York: Routledge. Retrieved from https://muse.jhu.edu/article/214299

It’s that time again. Time to file your income tax with the federal government, state, and city.

To find the federal tax forms, go to: http://www.irs.gov/Forms-&-Pubs

To find the State of Michigan tax forms, go to:

To find city of Detroit tax forms, go to:

To find other Michigan cities tax forms, go to the State of Michigan tax forms webpage:

Here’s hoping you get a hefty return!

As the new school year is settling in, it won’t be long before you have projects and presentations due. To spice them up you might want to add a picture or two.   To use copyright free images search some of the  websites listed below.

http://search.creativecommons.org has 12 websites with either images, video, or music.  However, Creative Commons cautions not to assume that all results are under the CC license umbrella.

American Memory, http://memory.loc.gov/ammem/index.html from the Library of Congress, includes historical photographs and film stills from a broad array of Americana.

Getty Open Content Program  http://www.getty.edu/about/opencontent.html  The Getty makes available, without charge, over 99,00 digital images to which the Getty holds the rights or that are in the public domain to be used for any purpose. No permission is required. However, please use the following source credit when reproducing an image: Digital image courtesy of the Getty’s Open Content Program.

HathiTrust Digital Library https://www.hathitrust.org/access_use HathiTrust is a collaborative library initiative. Users are encouraged to cite and link to digital content and are free to do so without asking for permission.

Summer time and the livin’ is easy.  Check out (literally and figuratively) our summer blockbuster movies.

Jaws. Celebrating its 40th year anniversary! Story of a killer shark that has taken over the waters near a seaside community, and the three men who set out to kill it.

E. T. the Extra-Terrestrial. A ten-year-old boy befriends a creature from another planet that has been stranded on Earth.

Shrek. A reclusive ogre and a chatterbox donkey go on a quest to rescue a princess for a tyrannical lord.

Animal House. Faber College has one frat house so disreputable it will take anyone. The campuses only other frat house is full of white, Anglo-Saxon, rich young men that no one can stand except Dean Wormer. The Dean enlists the help of their fraternity to get the boys of Delta House off campus. The Dean’s plan comes into play just before the homecoming parade.

Lion King. Simba begins life as an honored prince, son of the powerful King Mufasa. The cub’s happy childhood turns tragic when his evil uncle Scar murders Mufasa and drives Simba away from the kingdom. In exile, the young lion befriends the comically bumbling pair of Pumbaa the warthog and Timon the meerkat and lives a carefree jungle life. As he approaches adulthood, however, he is visited by the spirit of his father, who instructs him to defeat the nefarious Scar and reclaim his rightful throne.

Dark Knight. With the help of Lieutenant Jim Gordon and District Attorney Harvey Dent, Batman raises the stakes on his war on crime and sets out to dismantle the remaining criminal organizations that plague the city streets. The partnership proves to be effective, but they soon find themselves prey to a reign of chaos unleashed by a rising criminal mastermind known to the terrified citizens of Gotham as The Joker. The Joker, whose eerie grin and laughter characterize his emotional and mental instability, becomes a dangerous adversary that Batman seeks to stop at all costs.

Also use the catalog to find The Raiders of the Lost Ark, Star Wars, Grease, Independence Day, Marvel’s the Avengers, Guardians, Back to the Future, Die Hard, and more.  Break out the popcorn and enjoy!

Need some summer reading ideas?  Try these books from our collection:

To read a review: http://www.theguardian.com/books/2015/feb/04/a-spool-of-blue-thread-anne-tyler-review

To read a review:  https://www.kirkusreviews.com/book-reviews/andy-weir/the-martian/

To read a review: http://www.theguardian.com/books/2015/may/07/dead-wake-the-last-crossing-of-the-lusitania-erik-larson-review

To read a review: http://www.avclub.com/review/josh-malerman-overreaches-chilling-debut-bird-box-204771

Searching DOIs in Google, Bing or Other Search Engines February 2015

Last week’s Librarian blog was about finding a journal article by searching its DOI using the Library’s journal finder.  But you can also use a search engine, such as Google or Bing, to find an article by its DOI.

As discussed in last week’s blog, a DOI, or Digital Object Identifier, is a unique number given to an article to provide a persistent link to its location on the internet. The DOI is typically located on the first page of an article.

You may search the DOI in Google, Bing or another search engine.

The tricky part comes when you must guess which database UDM is likely to subscribe to. Clicking the first reference…

takes you to the homepage of the Sage journal: Review of Educational Research.(Note “sagepub” in the URL.) Once there you will find the full text free!

Remember: not all articles have a DOI and not all databases allow DOI searching.

Have you ever seen a DOI on an article and wondered what it was? DOI, or Digital Object Identifier, is a unique number given to an article to provide a persistent link to its location on the internet. The DOI is typically located on the first page of an article.

A new feature of the Full Text Journal Finder tool allows you to search using the article’s DOI.

Type the DOI numbers (do not type DOI) in the third search box.  For example:

You are now taken to the homepage of the journal: Review of Educational Research. As long as UDM subscribes to the journal, you will find the full text free! 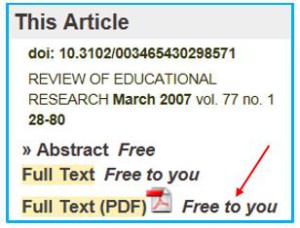 Always select the PDF as it is a photocopy of the article.  You will obtain all the charts, graphs, or photos in the paper as well as the original pagination.

However, be advised that not all articles have a DOI and not all databases allow DOI searching.